In a 26-page opinion, Cox wrote that the expenses stemmed from charges “that originate from personal activity unrelated to performing the functions of the public official’s office[.]”

Cox is regarded as one of the frontrunners in the race to be the Republican candidate in the 2010 Michigan gubernatorial race.

. . . just ask Cliff Taylor. Or better yet, check out his campaign finance filings. 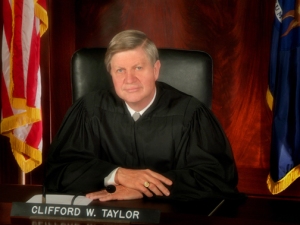 According to information collected by the Michigan Campaign Finance Network, Taylor has raised more than $1.4 million this year, “setting a new record for a Michigan Supreme Court candidate’s campaign committee.”

Meanwhile, the Michigan Democratic Party, staring hard at the Sept. 5 kickoff date for their state party convention, is still scrambling for a top court candidate to nominate and shower with money.

The party’s unfruitful search for someone to square off with Taylor has been well-reported, and has prompted Susan J. Demas, blogging in Capitol Chronicles, to suggest that the “obvious choice” has been in front of the Democrats all along. Check out her tongue-in-cheek suggestion that MDP Chair Mark Brewer should go for it.