Aceval, you’ll recall, was charged with a major drug offense. The jury deadlocked. Later, Aceval alleged that the trial judge and the prosecutor knew some of the prosecution’s witnesses were lying under oath and did nothing about it.

His second trial got underway but ended abruptly with his guilty plea in the face of allegations that he persuaded a prosecution witness to lie on his behalf. See, The Michigan Lawyer, “MSC to consider COA’s conflict ruling in Waterstone case“, for more background on Aceval’s case and the messy business of trying to get a perjury prosecution going against the judge who presided over Aceval’s first trial. 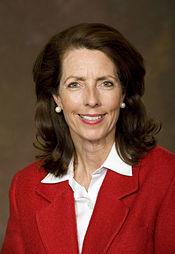 The latest chapter in the protracted saga: Aceval’s attorney, David L. Moffitt, moved to disqualify Justice Diane M. Hathaway from participating in Moffitt’s motion to have the Court rehear its 3-3 denial of Aceval’s application for leave to appeal. See, The Michigan Lawyer, “MSC denies drug defendant’s appeal on 3-3 vote, Corrigan may testify for former judge in related case.”

Hathaway denied the motion and wasn’t shy about her reasons for doing so:

I have carefully reviewed this matter and I find that I have had no involvement in defendant’s case as a trial court judge or as a former member of the Wayne County Circuit Court bench. I did not have any actual knowledge of defendant during my time on the Wayne County bench. Further, I am not personally acquainted with defendant, or counsel for the defendant, and accordingly harbor no bias or prejudice against either of them …

Defendant essentially alleges that I cannot be impartial in this appeal because I was a member of the Wayne County bench at the time of his conviction and am acquainted with the other members of that bench. However, the mere fact that I was a member of the same trial bench clearly does not support recusal in and of itself. …

Defendant’s challenge to my ability to be impartial in this appeal is also based on the unsupportable and fictitious premise that there is widespread corruption and cronyism among Wayne County judges and prosecutors. This bold assertion is supported only by numerous disjointed and bizarre allegations and opinions of his counsel. …

He further challenges my ability to be impartial based on my former marriage to Richard Hathaway, (former Wayne County Circuit Judge) currently a Wayne County prosecutor. However, I have been divorced from Richard Hathaway for over 15 years, we do not share any common financial or business interests, and I do not harbor any bias or prejudice for or against him. Moreover, I am unaware of what specific role Richard Hathaway has played in this prosecution, or its relevance to any issue in this case, and defendant has failed to provide any details in this motion.

Markman also provided a statement regarding the motion to disqualify. Whatever thoughts he had about the motion’s merits, or Hathaway’s disposition of it, he appropriately kept to himself.

It’s the second sentence in the above quote that prompted Markman’s statement:

In Pellegrino, this Court allowed other justices an immediate opportunity to respond to my statement to deny the disqualification motion directed toward me. In the instant case, justices are not to be afforded a similar opportunity until after, and unless, the attorney who initially moved the disqualification motion against Justice Hathaway has requested that her decision be reviewed by the full court.

Thus, one procedure entitles justices to review the disqualification decisions of other justices, while the other procedure allows such review only if sought by the attorney.

What’s the harm in that? Plenty, according to Markman:

Relevant to the instant procedure is that the motion for disqualification here was filed on Oct. 16, 2009. Now, more than six months later, a denial and an accompanying statement have been issued, and yet the process may still not be close to an end.

Thus, an entire term of this Court will likely have passed and there will have been no resolution of the dispute that has brought this criminal appeal to the Michigan Supreme Court in the first place.

Not only then does the instant procedure improperly confer a monopoly upon lawyers in triggering full Court review of disqualification decisions, but it extends the disqualification process to unreasonable lengths to the detriment of justice.

The tail now wags the dog where a disqualification motion has been made, and it is quite certain that some number of such motions will be incentivized in order to delay rather than to facilitate justice.